Richard Osmond, Chairman and Interim CEO, comments, “The Phase 1 drill program at Elida was a complete success and exceeded expectations with several long intercepts of strong copper mineralization starting at the bedrock surface and, in the case of drill hole ELID025, mineralization extended to depths greater than 900 m. The program was successful in defining the limits of copper mineralization at Target 1 with the appropriate drill spacing needed to complete an initial resource estimate, which we expect to publish later this year. We are excited about our plans to move forward with a Phase 2 program intended to expand on potential resources at Target 1 and drill test Targets 2 and 3.”

Phase 1 drilling at Elida successfully achieved the program objectives of: (1) investigating the vertical continuity and zonation of Target 1 mineralization, (2) improving the confidence in the interpreted mineralization boundaries, and (3) attaining a drill hole spacing that is appropriate for estimating a potential mineral resource for a portion of Target 1. Information returned from the Phase 1 program was used to revise the interpretation of mineralization boundaries shown in Figure 1. Drilling tested the mineral system to a depth of 933 m below surface and indicated mineralization is open at depth. The existence of coherent, higher grade internal zones that extend up to the bedrock surface is an important outcome of the recently completed program.

ELID025 intersected a continuous interval of mineralization from the bedrock surface to the final hole depth of 947.2 m and returned 908.75 m at 0.39% Cu, 0.035% Mo, and 2.9 g/t Ag for 0.55% CuEq1 (Figure 2). The hole was designed to test the vertical continuity of mineralization to depths of greater than 500 m while trying to avoid intersecting the low-grade central quartz monzonite porphyry (“QMP”) intrusion. The hole ended in mineralization and was discontinued for operational reasons. Chalcopyrite remained the copper-bearing sulfide mineral for the entire length of the drill hole and indicates a vertically protracted mineral system. Notably, arsenic (“As”) was low at 42 ppm and did not correlate with Cu grade.

ELID024 was collared a short distance west and outside of the mineralization limit inferred from earlier drilling (Figure 3). Continuous mineralization was intersected from where the hole entered potassic-altered bedrock beneath 120 m of unconsolidated gravel. Starting at a depth of 198.45 m, the hole intersected a 451.75 m interval of 0.38% Cu, 0.034% Mo, 3.1 g/t Ag (0.53% CuEq1) associated with quartz veining and potassic-altered sedimentary rocks. Intensity of mineralization increased steadily downhole where a 182.7 m interval of 0.47% Cu, 0.047% Mo, and 4.5 g/t Ag (0.67% CuEq1) is reported between sections containing ELID020 and ELID025. Included within the interval is a 72.5 m subinterval of 0.59% Cu, 0.048% Mo, and 4.5 g/t Ag (0.81% CuEq1), which indicates coherent, higher grade zones are an important component of the broader Target 1 mineralized zone. The hole was drilled orthogonal to other Phase 1 holes to test the east-west continuity of mineralization and constrain its western limit. The results support a vertically oriented mineralized zone with a geometry concentric to the QMP inferred from available drill holes.

Results from the Phase 1 drilling program increased confidence in the position of mineralization contacts interpreted from previous sparse drilling and demonstrated continuity of mineralization within the interpreted mineralized zone. Drilling also more than doubled the depth of investigation from 400 m to 933 m below surface and confirmed that the mineral system begins at the bedrock surface beneath 30 m to 120 m of unconsolidated gravel cover. A portion of Target 1 now has drill holes nominally spaced at 100 metres, which are considered appropriate for potential resource estimation.

The Company plans to use drilling results from the Phase 1 program to prepare a potential initial resource estimate. In parallel, preliminary metallurgical studies have been initiated to examine recovery and comminution characteristics of mineralization for use in preliminary economic studies.

Exploration planned for later in 2022 will be designed to test the unexplored segments of the Target 1 mineralized zone and further constrain limits of mineralization where drill holes are lacking. Initial drill testing of Targets 2 and 3 will also be planned (see Figure 5).

Elida Resources S.A.C., a wholly owned subsidiary of Element 29 Resources Inc., supervises drilling and carries out sampling of HQ core. Logging and sampling are completed at a secured Company facility situated near the Elida project site. Sample intervals are nominally 2 m long. Drill core is cut in half using a rotary diamond blade saw and samples are sealed on site before transportation to the ALS Peru S.A.C. independent laboratory in Lima by Company vehicles and staff. Samples are analyzed for 35 elements using an Aqua Regia digestion and ICP-AES analysis (ME-ICP41). Samples reporting over limits are analyzed by Aqua Regia digestion with ICP-AES finish (ME-OG46). ALS meets all requirements of International Standards ISO/IEC 17025:2005 and ISO 9001:2015 for analytical procedures.

The scientific and technical content of this press release has been reviewed and approved by Paul J. Johnston (PhD, PGeo), who is Vice President of Exploration for Element 29 and is a “Qualified Person” as defined in National Instrument 43-101 Standards of Disclosure for Mineral Projects.

Elida is a porphyry copper-molybdenum exploration project within a property composed of 28 mining concessions totaling 19,210 hectares that are 100% owned by Elida Resources S.A.C., a Peruvian subsidiary of Element 29. The property contains a large, 2 x 2 kilometre (“km”) alteration system enclosing a cluster of porphyry centres that represent five distinct exploration targets. In 2021, Element 29 completed seven drill holes totalling 4,481 m that intersected multiple, long intervals of Cu-Mo-Ag mineralization and traced mineralization to a depth greater than 900 m. Mineralization remains open at depth. The remaining four large targets are untested. Under the current drill permit, the Company can elect to drill-test all identified targets.

The Project is located in central Perú, approximately 85 km inland from the Pacific coast at moderate elevations between 1,500 m and 2,000 m and close to transportation and power infrastructure, including a 45 mega-watt hydroelectric generation facility situated 15 km from the project.

Element 29 Resources Inc. is an emerging copper exploration and development company focused on advancing its portfolio of Peruvian projects towards development in one of the world’s lowest-risk mining jurisdictions. Element 29’s growth strategy is led by our strong board and management, who have a proven track record of discovery and delivering significant value to shareholders.

The Company’s principal objective is to explore and develop its flagship Flor de Cobre porphyry Cu-Mo project located in southern Perú, 26 km southeast from Freeport-McMoRan’s Cerro Verde Cu-Mo mine. At the same time, the Company intends to build on its potential copper inventory with continued exploration of its Flor de Cobre project as well as its remaining 22,000 ha of mining concessions in Perú, including the recently discovered Elida porphyry Cu-Mo-Ag system located in central Perú and 85 km from the coast. Both projects are well located for future mine development and will benefit from nearby infrastructure including roads, powerlines, ports, water, and a skilled workforce. More information is available at www.e29copper.com.

Figure 1. Plan view of Target 1 at the Elida Porphyry Cu-Mo project. The Phase 1 drilling program consisting of seven holes was completed in December 2021. The last three holes from this program are reported in this press release. Section locations for Figures 2, 3 and 4 are indicated with white dashed lines. Holes ELID001 – ELID018 were completed by Lundin Mining in 2014/15 and ELID019 – ELID025 were completed by Element 29 in 2021. 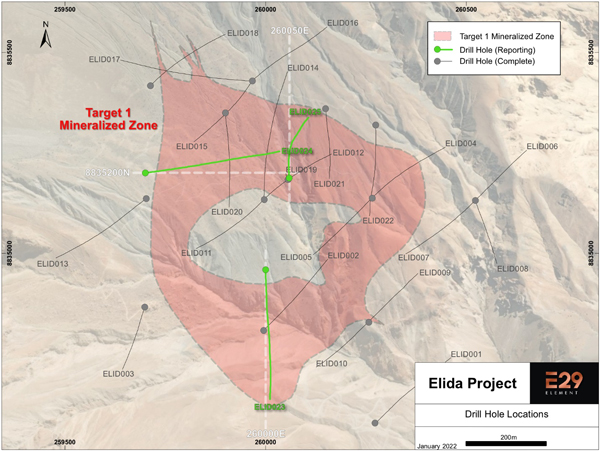 Figure 2. Cross section 260050 E showing hole ELID025. The hole entered well-mineralized, potassic-altered sedimentary rocks immediately beneath 35 m of gravel cover. Continuous mineralization was encountered to the bottom of the hole at 947.2 m. This hole demonstrated the vertical continuity of mineralization to a depth of 933 m below surface. Apart from the zone of strong mineralization present near the top of the hole, other well mineralized intervals are distributed throughout the hole. The hole ended in mineralization and the mineralized zone remains open at depth. 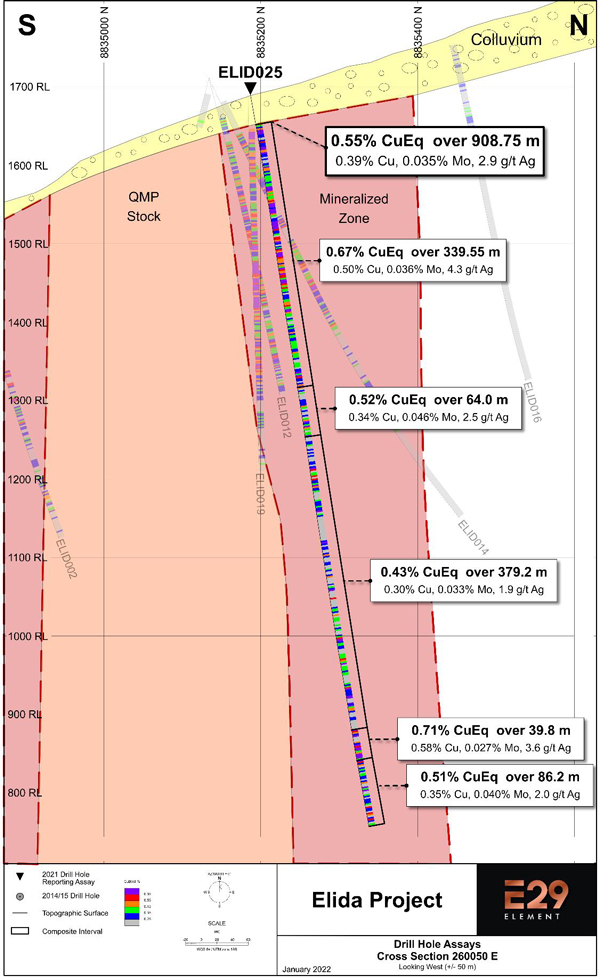 Figure 3. Cross section at 8835200 N showing the position of ELID024. This hole was designed to constrain the western limit of Target 1 mineralized zone and test for continuity of mineralization in a direction orthogonal to the other Phase 1 drill holes, specifically ELID020, ELID019, and ELID025. More drilling is required to determine the orientation of the western limit of mineralization, which is interpreted to be vertical. 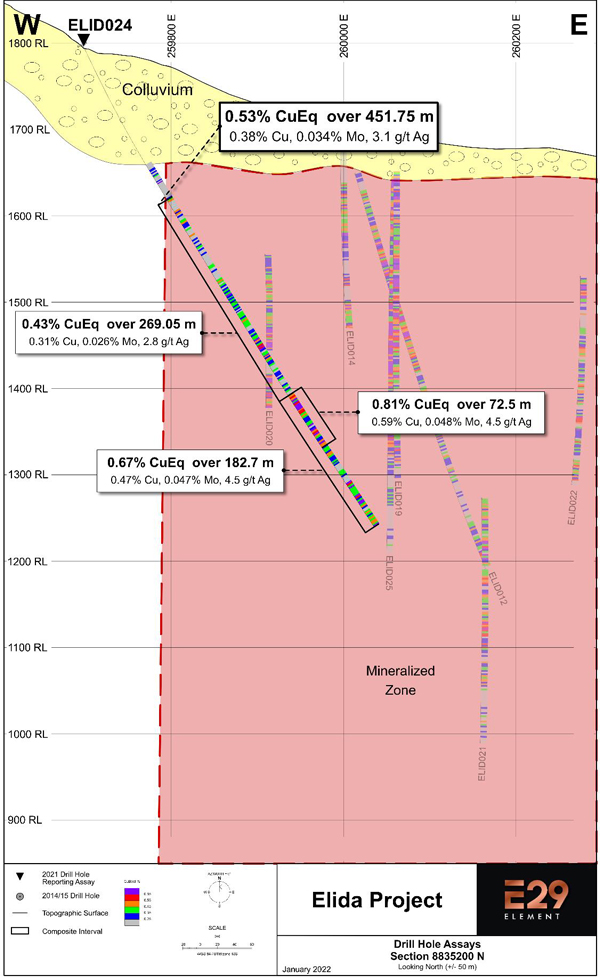 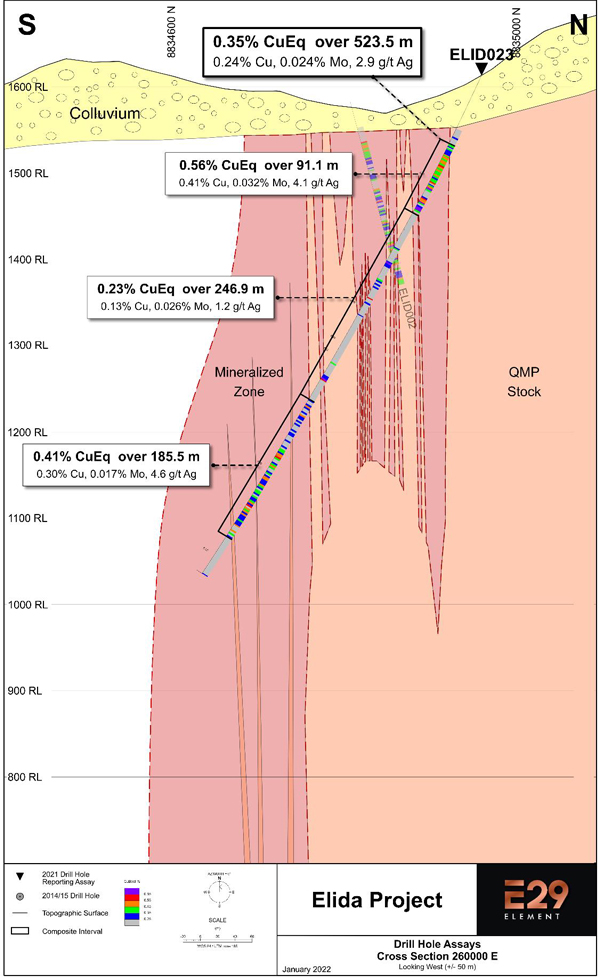 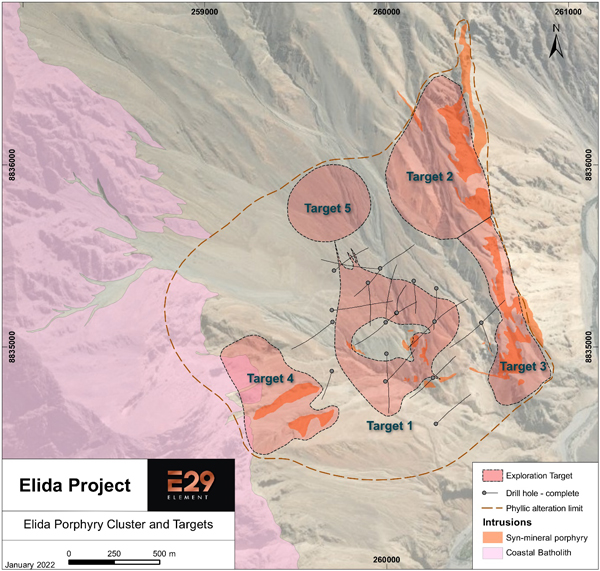 Image 2. ELID023, 397.5 m from a 2 m long sample interval reporting 1.07% Cu, 0.003% Mo, 14.6 g/t Ag. Quartz vein containing a chalcopyrite assemblage in potassic-altered feldspathic arenite. Chalcopyrite is disseminated in the quartz vein and wall rock and in chalcopyrite-pyrite veinlets that overprint the quartz vein. Molybdenite is unusually low in this part of the drill hole. Core is HQ diameter (63.5 mm). 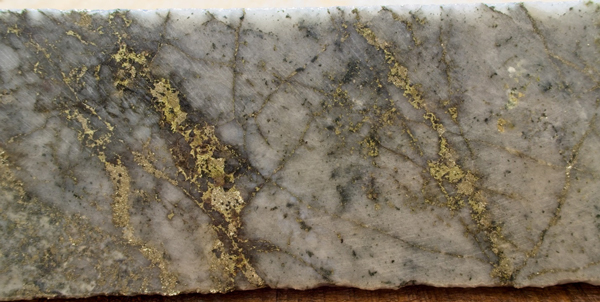